Electronic health records have come under scrutiny lately, and that has continued this week at HIMSS15, the 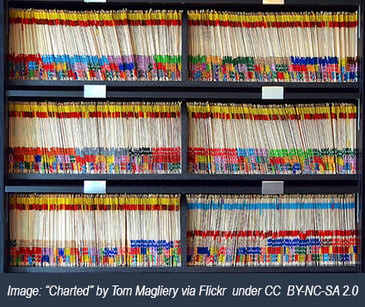 annual conference of the Health Information and Management Systems Society (HIMSS). Here's some of what's been addressed at the conference so far:

Despite the aforementioned and other pointed criticisms, EHR is here to stay. According to an article in the Wall Street Journal, "...nearly 80% of doctors and 60% of hospitals have converted from paper files to electronic health records...since 2009. " And that's not a bad thing.

Doctors, nurses hospitals, and health IT professionals have had several years to se electronic health records in action, and they've had a chance to figure out what works and what doesn't.

The following list is by no means exhaustive, but the items that they address come up often. So, without further ado, here are three improvements that we think EHR needs to become as seamless and indispensable to healthcare as stethoscopes:

We're starting with the big one here. Today, it is very difficult for digital health records to work from one healthcare setting to the next, and sometimes even within a single large setting. Last month, the West Health Institute released a survey of 526 nurses. 50% of the nurses surveyed said that they'd witnessed medical errors that occurred because the devices that they use aren't coordinated. Thousands of people die from medical errors every year in the U.S., and those errors cost $1 trillion a year. Interoperability could save lives and reduce healthcare costs.

Besides talking across platforms (see above), too many electronic health record systems are cumbersome to use. The Indianapolis Business Journal reported on trend that seems like a throwback to ancient times. Hospitals are hiring scribes. Granted, these scribes aren't etching studied calligraphy onto parchments, but one of the promises of EHR was that they' save time and facilitate patient engagement. However, Medscape's 2014 EHR report found that while 63% of doctors surveyed agreed that they had better documentation because of EHR, 38% thought that their system worsened their patient service and 35% thought that they had worse clinical operations than before implementing EHR.

Drs. Sameer Badlani and Robert Wah participated in a Healthy Dialog from HIMSS15, in which they discussed what doctors want from their EMR or EHR systems. Among the things that they want is to be involved with the implementations. Delivering software that fits seamlessly into users' workplaces requires software developers to know who their customers are, and that means talking -- and listening! -- to their customers' stakeholders. The end result is software that performs practically invisibly in an actual healthcare setting. You can watch the doctors' short video below.