Last week, Apple announced that it had released the first generation of ResearchKit. For those of us working to 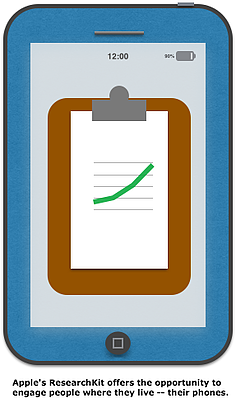 bring the internet to healthcare, the Web blew up with strong opinions about it. Whether you are for or against the new platform, it has to be acknowledged that it is an important step toward further uncloaking the world of biomedicine and making it accessible to lay consumers in the healthcare marketplace.

Lately, people who might not have a direct stake in the world of biomedicine have become acquainted with a few of its landmarks, particularly the process of clinical trials. Sports fans followed the late ESPN broadcaster Stuart Scott’s seven-year battle against appendiceal cancer, which included his participation in a clinical trial. Last December, television news magazine 60 Minutes aired a segment on Patrick Soon-Shiong’s approach to disrupting cancer and a side story in the current season of the NBC FBI thriller The Black List illustrated one of the most common ways that patients become aware of clinical trials. Often, they know someone who can help them.

The announcement and the toolkit make it possible that millions of Americans can be made aware of clinical research directly. They may even have an impact on improving reporting on trial results. The kit could be just the thing that engages millions of people where they live -- on their phones.

Still, people have concerns, many of which are valid, about ResearchKit.  For our part, it  is more boom than it is bust, despite those concerns. Following is a list of 5 criticisms that I’ve seen more than a few times over the past week along with the reasons that I’m not terribly concerned.

Now, if we could make finding our medical data as easy as finding our iPhones, we’d be onto something. We’re working on it.