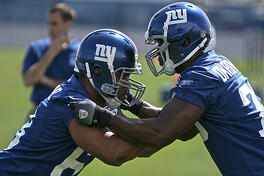 decrease concussions on the football field, this week is full of good (or at least very interesting) science and health news.

Check these stories out during your next inflammation-fighting coffee break (see below).

If you are a football fan, you have probably heard of CTE, or chronic traumatic encephalopathy. While this kind of brain injury isn't reserved for football players, much has been made of players -- especially professional players' -- propensity to develop this tragic, life-altering condition after sustaining multiple concussions. Virginia Commonwealth University neuroscientist and devout football fan, Raymond Colello is investigating inserting magnets into football helmets to reduce the force with which players' heads collide.

Maybe not your morning cup of joe itself, but researchers at the University of Georgia have found that chlorogenic acid (CGA), a chemical compound found in coffee, as well as in apples, pears, tomatoes, and blueberries reduced insulin resistance and fat accumulation in the liver in mice eating a high fat diet. Take note: the rodent subjects were injected with large doses of concentrated CGA, but a few cups of coffee along with a generally healthy diet can reduce the likelihood that you'll develop obesity-related illnesses like Type 2 Diabetes. The study is pay-walled, but you can read the abstract here or the related press release here.

Don't Believe Your Eyes (or Your Ears)

This month, Nautilus Magazine confronts us with our own faulty senses in an issued titled "Illusions." Virginia Hughes' story, "Fooled by Your Own Brain" challenges readers to acknowledge that even the most observant of us frequently miss the devil (or gorilla) that isn't exactly hiding in the details. The video below is one that she uses to illustrate a phenomenon called change blindness. And here's a bonus: in the same issue you can learn how people exploit the senses to make charts misleading. You can read other posts about the senses on our blog here.

The New York Times reported on a device that slows the growth of cancer cells in patients with a type of brain tumor called glioblastoma. The device is an electrical cap glued to patients' shaved heads made by Novocure, which is based in Jersey, in the Channel Islands. When used in conjunction with chemotherapy and other traditional treatments in a study, patients using the electrical cap survived (on average) three months longer than those receiving standard treatments alone. Novocure is optimistic that the same kind of therapy  can be used to treat other forms of cancer.

It's not exactly romantic, but a study in the journal Microbiome shows that the oral microbiome can be shaped by kissing. According to the study, you and the object of your affection swap 80 million bacteria  during a passionate embrace. While 80 million may seem like an awful lot of bacteria, about a billion bacteria are housed in the mouth. But still, yuck!

Word of the Year

The lexicographers at Oxford Dictionaries are putting together their year-end list of words that captured the zeitgeist of 2014. This year's Word of the Year is "vape" a verb that describes inhaling and exhaling the vapors from an e-cigarette or similar device. No, it isn't good health news, but perhaps the word's new found fame will bring more attention to the emerging science about using e-cigarettes.

Photo by MarineCorps New York via Flickr under a Creative Commons license.