On Tuesday, Will FitzHugh blogged his thoughts about the big data conference that he attended last week, and 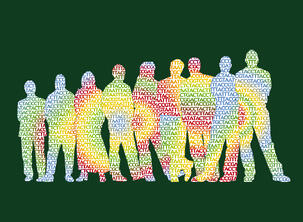 in the post, he noted that "[a]s data sets grow, deriving useful knowledge from them becomes harder. This might seem counterintuitive, since scientific research often involves adding more data to be able to draw conclusions confidently."

This got me thinking about how researchers and clinicians already using  extremely large datasets and how that might change when managing the huge amount of readily available data is no longer a hurdle as more as better data tools and methods evolve; and as the cost of DNA sequencing decreases.

Of course none of this is without difficulty or controversy. Recently, MIT researcher Yaniv Erlich showed that de-identified genomic data could be patched together, and re-identified. Dr. Erlich is one of the good guys and performed his experiment as a way to show that even when it is surrounded by mountains of other de-identified data, an individual's genome can be unmasked.

The Times article cited above also notes that the doctor's quick thinking caused some not completely unwarranted hand-wringing at her hospital. Data mining to treat a particular case can be good medicine in a patient's best interest. On the other hand, the doctor published her findings in the New England Journal of Medicine, possibly tipping her approach just to the edge of what could be considered research. If it were research, the doctor would need to have gotten the data owners' permission to use their records.

Will FitzHugh is right: deriving useful information from growing datasets is hard. And not only for the reasons that I thought.

What are you thinking about big data? Comment below, and if you have data needs