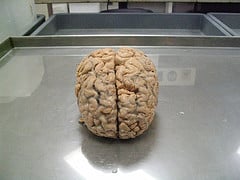 Disease (AD). In general, as people get older, they become more susceptible to this irreversible, degenerative brain disease. In fact, the prevalence of AD doubles every five years after age 65, and while AD is not "normal" aging, as the population ages the numbers of cases of AD will increase commensurately. To put that into perspective, by 2050, 20% of the population will be 65 years old and older.

No doubt, finding a cure for AD is important, and on that front, we're happy to report some progress.

Dr. Rudolf Tanzi and his team at Massachusetts General Hospital in Boston have been able to grow human brain cells in their lab and cause those cells to develop AD's characteristic amyloid plaques and neurofibrillary tangles. In the past, researchers were stumped by recreating plaques and tangles in their petri dish based models. Dr. Tanzi's group created their models in 3D so that instead of lying flat in a dish, the lab-grown cells were suspended in a 3D gel matrix.

Besides boosting Alzheimer's research and drug development, Tanzi and his team expect that this kind of modeling can impact research and development for other neurological disorders. You can read the research in the journal Nature.