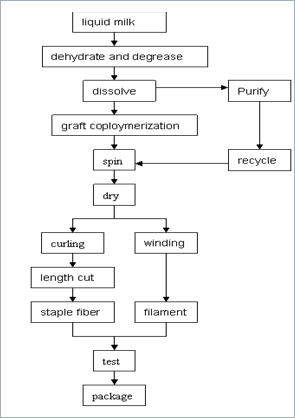 Just the other day, I saw a story on a German fashion designer making clothes from milk ( YouTube video article). It sounds crazy, but looks quite impressive. No, it’s not a “modern” exhibit of smelly congealed milk somehow formed into a gelatinous, slimy looking onesie (at least that’s what I imagined reading the headline) or Lady Gaga’s meat dress. There is a fine line between sustainable and gross. Anke Domaske, a microbiologist and the designer behind Mademoiselle Chi-Chi and the newest milk line has demonstrated the isolation of the protein from spoiled milk, mixed in other ingredients and made fiber that can be spun into yarn. The process only takes an hour and is eco-friendly since it recycles milk (although I wonder if all the methane from cows producing the milk was factored into the eco-friendliness calculation). The clothes look completely normal, and apparently resemble the look and feel of silk, with the properties of cotton.

I was impressed by this development, but apparently milk fiber isn’t a new thing. The Doshi Group, explains the process that has been around since the late 1930s and provides a figure outlining the steps.

Although obviously this isn’t as novel of an idea as I thought it was initially, I still think it’s pretty great. Perhaps the world wasn’t ready for milk clothes back in the 1930’s-1940’s, or maybe the developments since than have made the fabric more wearable and appealing, or maybe the green movement (and the sheer novelty of the clothes) will help propel support for this “new”, allegedly eco friendly fabric. Either way, it’s still yet another reminder of how science and research can (and do) affect everyone. I always feel like people are looking at me like an alien when I tell them I’m a bioinformatics scientist, and I see their eyes slowly start glazing over with confusion when I explain it’s a cross field of computer science and biology. I wonder how Anke feels describing her bio-fashionista background. What would her title be- a biofashionetics expert? Being in the field, I constantly see the pay off of collaboration and integration of various people’s strengths and backgrounds into projects and research. I’m happy to see that something as accessible and understandable to everyone as clothing is pointing out just how much collaboration, innovation, creativity and science is necessary to make a useful and beneficial result.
END_OF_DOCUMENT_TOKEN_TO_BE_REPLACED
0 Comments Click here to read/write comments

This is yet another divide we face as we pull together science and medicine, researchers and clinicians and patients. The other, of course, is this country's digital divide, which we are reminded of nearly every day when we step away from the alphabet soup and remember that HIE and MU and EMR and PHR presume a person has access to the digital world. Bringing exchange and consent and personal medical records to mobile devices might help bridge the divide, but only slightly.

How do we press forward, how do we "wield technology's wonders to raise health care's quality and lower its cost," without broadening the basic economic, literacy, digital, and genomic divisions among us? Is the achievement lessened if we create a world in which some of us have lifetime electronic medical records, while some of us still lack access to basic health care? Are technology and biotech smashing down our barriers, or making them worse? We're not philosophizing here - these are questions that concern us, and we'd love to hear your thoughts, links, commentaries (comment below to join the conversation). To paraphrase our president, can we join imagination to common purpose, harness courage to necessity, to make real the benefits of science, medicine, and technology - for all?

DNA Testing: Gone to the Dogs?

If you don't have the time to check the link (and I know most of you don't), there is now simple, inexpensive DNA testing developed specifically for dog droppings, to identify violators of “leave no mess behind” rules and regulations in residential areas. The Reuters story in the link draws attention to an example of a New England apartment manager when, fed up with scat left about her property, she decided to enlist DNA technology to find the violator(s) and solve the problem: Enter "PooPrints," developed by BioPet Vet Labs.

How does PooPrints work? Managers basically require that every new pet that moves in provide a cheek swab so their doggy DNA can be extracted and entered into the database. As time passes--and offending piles are dropped about the property and left behind--the property manager collects "gumball-sized amounts" (gross) of the #2 in question, mailing those samples in to the testing facility. The lab runs said samples against their database, and the guilty pooches (rather, their naughty people) are instantly identified. Then the owners are hit with pretty hefty fines—upwards of $1,000 in some referenced cases. And the accuracy rate is listed at 99.9%, so good luck explaining that one away when the DNA results are revealed... <dog howls in painful denial of the truth>.

It seems that unsanitary, unsavory conditions are a big enough deal to some property managers that they are ready and willing to take CSI-style investigation into their own hands (rather, into their zip lock bags). But there are much more interesting examples of DNA harvesting a la scat that carry weight. In one study-- found here--researchers aim to assess distribution, abundance, and broad movement patterns of snow leopards in Bhutan using non-invasive genetic analyses of DNA found in scat samples. This method allows biologists to carefully collect not only conventional population metrics but also genetic information in a more passive manner, ideal for such creatures. Combining geo-referencing, scat sampling, and DNA analysis, they are assessing both distribution and abundance of the creatures, also allowing them to estimate minimum population size and effective population size, and to document the presence or absence of population structure and gene flow.

Though the scientific research possibilities are exciting and encouraging, my simplistic mind wanders back to the sidewalk-scientist doo-doo tester… Will it one day become illegal to snatch up dog poo without the express written consent of the owner? Will the testing, sampling and processing (yuck) procedures become inadmissible because they were not handled by experts in the field? Will any accused try to take the legal route and challenge the findings based upon such technicalities? The imagination just runs wild on this topic and the hours of due process (or shall I say... "doo" process…bad, I know) it might create.

Bottom line is that whether for legitimate scientific research or even for what seems like such a trivial thing as dog droppings left behind on a sidewalk, simple DNA testing is rapidly finding its way into the hands of anyone who wants it—Even common folks with a “need to know” like you and me. No longer limiting the boundaries of test technology to weighty matters or prohibitive price points, nor limiting testers themselves to being highly educated professionals with years of training, this application of backyard science is interesting to be sure. This mainstreaming could begin to translate into widespread DIY investigations all over the place, for all kinds of purposes.

I can almost see/hear the infomercial for a garden variety, mass produced at-home kit: “So easy, even your kids can do it! Just grab your sample, place in our patented “Who-Dunnit” sample pouch, drop in the mail using the postage-paid envelope provided, then sit back and get ready to prove that guilt!” Proof positive for all… And beyond a shad-doo of a doubt, no less, at least in the case of PooPrints. I know…That was bad, but I couldn’t resist.
END_OF_DOCUMENT_TOKEN_TO_BE_REPLACED
0 Comments Click here to read/write comments
All posts