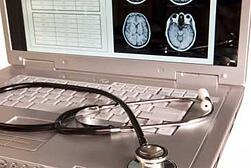 By doing it in this manner, HCA avoided a significant cost of delay--If they had waited to sample the entire market one at a time or picked the wrong vendor for their needs at the outset, then their financial burden would in fact be greater than the path they took in stroking checks to four different vendors. Management and accountants at many companies would shun the latter idea. This also takes into account the idea of cost of ownership. The benefit of this decision was not to have a sudden massive rollout of one system and have the doctors and nurses spend far too much time learning how to use the product down the road. This is a great example of one of the benefits of the Agile mindset, discussed earlier in the day at AgileDC--The customer "discovers" what he needs when he actually uses the product.In this case the customers were HCA's employees and users of the system.

Could this case study be looked at on a much larger scale? In the Federal Health IT arena, while the future is bright for EHR's to become a higher priority, the horizon is certainly cloudy in terms of execution and utilization. Will there be a Nationwide Exchange that brings everyone together to the same table? Or will it be a series of exchanges and groups of regional and state level communities communicating locally? Will EHR's become standardized with a singular product that is used by every hospital and healthcare system nationwide? Or will it continue to be a free market of many vendors supplying individual practices with customized solutions? If this country wants to take a page out of HCA's Lean approach, we should advocate for increased funding in EHR's so that many different solutions can be researched...and used... by members of the healthcare community. Essentially, spend more now to save even more later. The government could potentially save taxpayers a huge cost of delay by inviting and funding many different vendors and architects of all sizes and capabilities to participate bring the best solution to this increasingly politically motivated initiative. Furthermore, there is a more real Cost of delay with a capital 'C'--The high cost of waiting to provide people with the essential healthcare they need with the best technology and capabilities at hand.