Genomic Research: Whose Data Is It? What's Important? 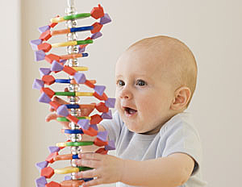 Admittedly, I am a bit behind in my journals, so I only recently read articles in Nature entitled Secrets of the Human Genome Disclosed and Genomes on Prescription. The first article was about geneticist Ghoulson Lyon, who presented a research study at a conference on a family suffering from an unknown, apparently genetic, disease. He was trying to find genetic variants associated with the disease, which caused some male children in the family to die before they reached their first birthday.

In a paper published in July, Lyon and his co-authors describe how they did indeed find a candidate variant, how they found that same variant in another family with the same condition, and how they performed some lab tests to see how the genetic change affected protein activity. From this evidence, they concluded that this particular genetic change caused the condition found in the affected children in both families.

Then Lyon found that a woman in one of these families was a carrier of this mutation, having one copy of it. It is on the X chromosome, so passing one copy on to a male child would mean that the child would have the disease, according to Lyon’s model. That means there is a 50% chance any child from that mother would die before they reached their first birthday. And, sadly, Lyon discovered that the woman was pregnant.

Now, what should he have done? You might think that he should have just told her, and that was my immediate reaction, too. But consider these points:

In the end, he did not tell her, because the sequencing had not been done in a lab approved under the Clinical Laboratory Improvement Amendment (CLIA). CLIA is meant to ensure that lab results are accurate enough to be used for clinical purposes--this addresses the first point above. The baby was born, and did indeed suffer from the same condition. If he had done the sequencing in a CLIA lab, I would be interested to know what he would have done.

To address the points of the how the family feels, one would have to know how Lyon interacted with these families before the study. One would imagine that such as study could be preceded by a discussion like this:

Lyon: “Now, when I sequence the DNA of you and your family members, I may discover a genetic factor that is causing the condition some of them suffered from. I might even discover something that would tell me who could pass this disorder on to their children and who can’t. Would you want me to tell you about this kind of discovery?”

Woman: “I’m not sure, do you mean you could tell me if my children will be healthy or not?”

Woman: “That sounds confusing, I’d rather not know those kinds of results. I’d just get stressed out.”

Woman: “Yes, please tell me everything, even if it’s not a sure thing. That way I’ll be able to make informed decisions for myself and my family.”

Woman: “Even if you don’t tell me, won’t I be able to read the papers that come out of your lab and figure out what the results were anyway?”

Lyon (to himself): “Crap, maybe I’d better think about this a little more...”

Ok, partly I’m just trying to be funny, but you get the idea. This is a complicated situation and different people might have very different reactions. What is clear is that people should go into these kinds of studies with clear information about what might or might not come out of them, and be asked beforehand what they would like to know. The problem with that is that research studies that look at whole genomes might find something that is unrelated to what the researcher was looking for in the first place. Like a child not being the biological child of their parents, or a person having a genetic mutation that is dangerous but unrelated to the subject of the study. I’m optimistic that all of these issues can be effectively dealt with by having open and educated discussions with patients and research subjects, and trusting them to be able to handle information about themselves. But I also recognize that others might feel differently and I’m afraid we are in for many future discussions on this topic.