Map of Biomedicine: Getting Diagnostic Products to Market

In my last post, I talked about the laboratory-developed tests (LDT), or “home brews.” LDTs are run in individual labs whose operations are regulated under Clinical Laboratory Improvement Amendments (CLIA). The home brews, however, are essentially unregulated, except in the sense that physicians and hospitals won’t recommend tests that aren’t good for their patients.

Last week five U.S. Senators raised concerns about the lack of regulation of LDTs. They noted that “advanced LDT’s are a staple of clinical decision-making and are being used to diagnose high-risk, but relatively common, diseases” so it is “imperative that they perform as they are expected.”

Physicians learn about LDTs from scientific publications that support the tests’ efficacy and utility. The publications usually show the results of running on test samples and reporting how the test did compared to other accepted measures, if available. For instance, Myriad Genetics, the original company that marketed the tests for mutations in the BRCA1 and BRCA2 genes, has an extensive list of publications on its web site that describe how those mutations are linked to breast and ovarian cancer.

Those publications will give some information about the accuracy of the test. No test is perfect, and they will produce some number of false positives (making a diagnosis which isn’t real) and false negatives (missing a diagnosis). The frequency of those events is very important for physicians when determining whether to give a test, especially when comparing it to other options.

The next level of regulation for diagnostic tests is called 510(k). These regulations, named after the section number of the law that created them, actually apply to a broader range of products than just diagnostic tests. They apply to medical devices, which the FDA web site describes as follows:

Medical devices range from simple tongue depressors and bedpans to complex programmable pacemakers with micro-chip technology and laser surgical devices. In addition, medical devices include in vitro diagnostic products, such as general purpose lab equipment, reagents, and test kits, which may include monoclonal antibody technology.

That description covers pretty much anything that is used by a physician or a surgeon when treating, diagnosing or operating on a patient. It also includes our focus: in vitro diagnostics. In this case, In vitro just means the test is performed outside of the patient’s body; for example, in a lab.

510(k), also called premarket notification, is a justification to the FDA that a device or diagnostic is safe and effective. Submitters can do this in one of two ways:

The latter type of approval is called a de novo approval. For example, the recent FDA approval of one of Illumina’s DNA sequencing devices was the de novo type, since there were no previously-approved high-throughput DNA sequencers. An example of an approval that based on a similar device is Celera’s submission of a cystic fibrosis test using DNA sequencing technology. Since there was a very similar test previously on the market from Tm Bioscience, Celera could claim that their test was substantially similar.

Like LDTs, there are also those who view 510(k) regulations as not strict enough. Critics contend that tighter regulations might have prevented approval of a device used in hysterectomies that can, in some cases, cause undetected cancer to spread.

The third, most stringent, type of FDA approval for diagnostics is called Premarket Approval (PMA). This involves much more work than for LDT or 510(k) approval, and often means conducting a full-blown clinical trial, much as for new therapeutics. My next blog post will talk more about PMA approvals since that’s a topic all by itself.

Back to the Map of Biomedicine 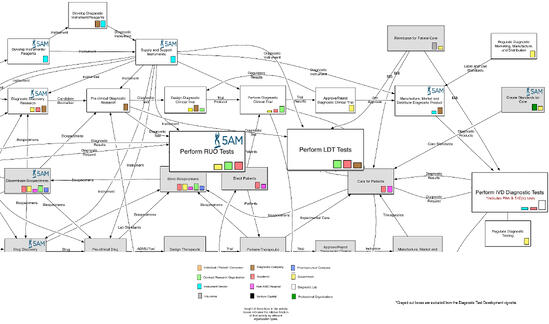 Now, in looking at the map again, you’ll see two, somewhat enlarged boxes labeled “Perform LDT Tests” and “Perform IVD Diagnostic Tests”. In the current incarnation of the map, I’m lumping PMA and 510(k) tests into the IVD Diagnostics box. In a future version of the map I plan to make a refinement to make it clear how those approval mechanisms are different.

Lastly, you’ll notice a third enlarged box called "Perform RUO Tests," which I haven’t discussed yet. RUO stands for “research use only”. That means the results aren’t meant to affect how a patient is treated. With that in mind, you might want to recall the story I referenced in the first post in this series, about a Wisconsin boy with a serious illness that defied diagnosis.