Curing Cancer from the Inside Out

Over the past year, The Atlantic magazine has published several articles on curing cancer. 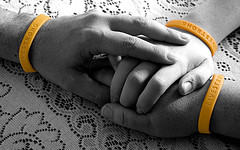 Overall, the tone in each article is hopeful, but balanced.

All of the articles are reminders to lay people and those in the cancer trenches alike of how far we've come in diagnosing, treating, and homing in on cures. On the other hand, the articles' optimism is balanced with the recognition of how far we still have to go and the hurdles that are still present.

In a conversation with The Atlantic's national correspondent, James Fallows, biogeneticist and one of the leaders in the public effort to map the human genome, Eric S. Lander, is hopeful but cautious about where we are on the road to curing cancer using what we know about genomics:

"...A good analogy is the germ theory of disease. There was a sweep of progress from the fundamental understanding around 1870 that microbes caused infectious diseases, to the widespread availability after World War II of cheap penicillin that saved millions of lives. That took about 75 years. With genomics, we’re maybe halfway through that cycle—something like the situation around 1915, when early, highly imperfect antibiotics were first introduced."

In a 30-minute procedure last fall, Dr. David Maloney, an oncologist at the Fred Hutchinson Cancer Research Center in Seattle led a study in which he infused a lymphoma patient with his own T-cells programmed to seek out and destroy his cancer. Over several weeks, the patient's tumors shrank.

This kind of therapy really is personalized medicine. According to Dr. Maloney, “We are moving away from a... one-size-fits-all approach... to a way of fighting cancer where we are essentially custom-making treatments for patients...".

But all of this doesn't mean that there aren't hurdles. Lander laments the negative effects of decreased NIH-funding on the ability of scientists to make transformational breakthroughs:

...[T]his is a unique moment to be investing. This is the first decade when we can actually look across diseases in this systematic way. The idea that we’re not investing to let a generation of young people try their riskiest, cleverest ideas is a tragedy. Because we’ve got such an opportunity."

Links to the full articles cited in this post from The Atlantic are below, along with a link an article about using technologies akin to Breathalyzers to diagnose some cancers and other diseases.

Can Doctors Teach the Body to Cure Cancer?
When Will Genomics Cure Cancer?
A Breathalyzer that Can Diagnose Cancer

Photo by Nic McPhee used under a Creative Commons License via Flickr.