Liquid Biopsy - Curing Cancer from the Inside Out, Ctd.

Last week, we did a post on curing cancer at the gene-level.  But what about using genes 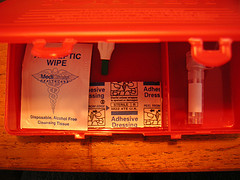 to diagnose cancer? A feature story in the MIT Technology Review looks at research happening at Johns Hopkins University on that very possibility.

Dr. Bert Vogelstein is credited with having proved that damaged DNA causes cancer. Now, he and his colleagues at Hopkins are on a mission to prove that cancer can be diagnosed much earlier -- perhaps decades earlier -- using a procedure called "liquid biopsy."

Nearly every type of cancer sheds DNA into the bloodstream, and Vogelstein’s laboratory at Johns ­Hopkins has developed a technique, called a “liquid biopsy,” that can find the telltale genetic material.

The technology isn't clinic-ready yet. The screening process is still too expensive to be used in, for instance, your annual check up. And, just when thought that there could be no downsides to diagnosing a cancer that might not be symptomatic for many years, the author presents a few:

Medicine has a precedent of handling predictive tests poorly. Consider the PSA test, which detects a protein linked to prostate cancer. Not only does the test produce false positives a majority of the time, but some of the tumors it actually detects are so slow-growing that they aren’t worth treating. Millions of men have ended up getting treated for cancers that ultimately wouldn’t have affected them. By one estimate, for every 47 men who had their prostates removed, a single cancer death was avoided. Studies by researchers at Dartmouth College suggest that mammography also leads to overdiagnosis and overtreatment. About 25 percent of breast cancers discovered, and treated, would not have caused any symptoms.