The Game of Science

Sometimes the "wisdom of the crowd" is what you need to solve a really hard problem on a budget. With cutbacks coming left and right in our recessionary world right now, science needs a little help from its friends - lots and lots of friends.

This week, we witnessed the first major public success of the crowdsourcing of science: Players of the protein-folding game Foldit discovered how a rhesus monkey AIDS virus protein attains its shape using a specific kind of crowdsourcing sometimes referred to as thin-slice volunteering. 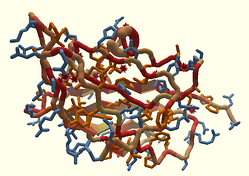 This may not seem like a big deal, but protein folding is a notoriously difficult problem to solve. Proteins are three-dimensional objects, and they are the moving parts in our cells. Their shapes are critical to the functions they perform, much like the gears in a finely-tuned watch. When proteins are first formed, however, they come out of the "protein factory" (the ribosome) as a long string of amino acid "beads" - not a three-dimensional shape. Through a lot of complex physics, they actually undergo a delicate dance of self-folding origami as they emerge, and wind up in a particular final shape that dictates much of their function. A shape which turns out to be really difficult to predict and model with computers. When we cracked the human genome, we obtained a lot of recipes for making the long amino acid strings. That doesn't always tell us, however, a whole lot about their actual functions - in order to predict those, we have to know the final shape the string folds into.

So scientists at the University of Washington got the bright idea to recruit cadres of video game players to try to fold proteins by hand. They created Foldit to act as a sort of Rubik's Cube of science, and spurred some healthy competition by scoring the viability of folding attempts and publishing a public leaderboard. The game itself is oddly compelling and beautiful - no science knowledge is required, and the game walks new players through a series of training exercises to familiarize them with the unique mechanics of the game. Then it's off to pick a protein and try to best the scores on the board. Thousands of players worldwide now compete to see who can do a better job. But how well does it all work for science? The proof came this week with the publication of the monkey AIDS protease solution discovered through Foldit and confirmed by X-ray crystallography. This was a protein whose conformation was unsolved for over a decade.

In addition to solving the structure of naturally-occurring proteins, Foldit also offers another tantalizing opportunity: predicting the structure of entirely synthetic proteins. Researchers can propose a string of amino acids, then ask Foldit players to try to fold it up, which may lead to the development of novel "designer" therapies for cancers, for example. The Foldit team has a publication on this in the works - stay tuned.

In addition to Foldit, the crowdsourcing/gamification of science is spreading to other areas where computing power alone hasn't proven to be sufficient to solve complex problems. Another puzzle-like science game is Phylo, which challenges players to find ideal alignments of genetic sequences between species. These alignments can reveal how closely related the species are and how their genes evolved, allowing scientists to build a more detailed and accurate "family tree" of life. Others include EteRNA, in which players design RNA, and a non-biology example in Galaxy Zoo, which asks players to eyeball images from the Hubble Space Telescope and try to classify galaxies into various categories. Galaxy Zoo users have already provided novel insights, including the discovery of a mysterious new object dubbed the "Voorwerp."

All of this demonstrates the power of engaging people by appealing to their sense of fun, their competitive spirit, and the thrill of helping to discover something new.  Besides, it doesn't take a big commitment from any individual - just casual play by a large number of people. Expect to see more successes from gamification and crowdsourcing of science in the future. Who knows, maybe you'll discover the next Voorwerp or the shape of a new cancer-fighting protein on your coffee break…