By 2011, the average age of a first-time NIH-funded, principal investigator with a PhD was 42. First-time PI's with MDs or MD-PhDs were over 44-years-old. In 1980, the average first time PhD-level NIH grant recipients 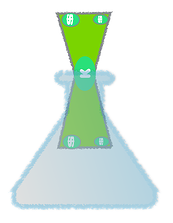 hadn't quite reached their 36th birthdays. So what's a researcher to do?

For some, the answer is: rally the Internet.

Alongside the rising age of PIs, science funding from government sources in the U.S. has fallen dramatically over the years. According to a Washington Post article, the government funded about two-thirds of all scientific research. Today, the pot has dwindled to around a third.

Scientists have begun to make up for the shortfall and compensate for the red tape by appealing directly to the masses. This approach to funding is still very new, but crowdfunding for other endeavors has been successful. People supported projects listed on Kickstarter, the largest, and perhaps best-known of the crowdfunding platforms, to the tune of $529 million pledged in 2014.

Even for science, Kickstarter hasn't been a bad way to go.

According to a paper published in the online journal PLOS One, scientists who take their cues from successful fundees, like musician Amanda Palmer and filmmaker Zach Braff, and develop a devoted fan base have a very good chance at seeing their projects funded. According to the Post article, scientists may have a better chance securing crowdfunding than government funding. In 2013, researchers had a 17% success rate securing funds from NIH. 64% of Kickstarter projects tagged "Science" got funded as did 38% of all of the projects posted on Experiment.com, a crowdfunding platform just for science.

While this is interesting and maybe even exciting -- I can see where crowdfunding could help to raise scientific literacy in the general public -- there are some cautions. There is a great deal of transparency in  crowdfunding, but there is also very few guidelines for scientific rigor (although Experiment.com users can be peer-reviewed) or ethics.

And while academia is warming up to crowdfunding, which had previously been dismissed as not particularly scientific, scientists can find themselves experiencing backlash from friends and family members who might perceive their appeals as internet-abetted panhandling.

More on the future of research here.