Despite Cure, Leprosy Hangs On

The World Health Organization (WHO) has made safe, effective multidrug therapies (MDT) to cure leprosy 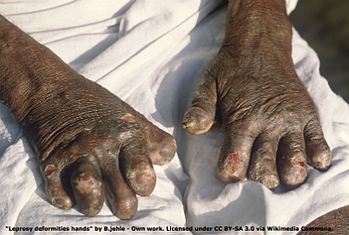 available free of charge worldwide, and has been largely eliminated in the world. Largely, but not completely.

In 2013, WHO reported slightly more than 189,000 new cases of leprosy. The previous year, there had been more than 232,000 new cases. The good news, then, is that there is less leprosy, but with the near ubiquity of a free, highly successful cure, you have to wonder why it isnt more rare.

Since biblical times, we've believed that, Mycobacterium leprae, the bacteria that causes the disfiguring, nerve-damaging, debilitating disease passed from person to person. That should mean that as more people get cured there should be a lot less M. leprae floating around, and dramatically less transmission.

Researchers long ago realized that there must be some non-human haven for the disease. Scientists have been stumped for years at the specific cause for leprosy's sheer stubbornness. Until now.

A study published in PLOS Neglected Tropical Diseases uncovers the environmental secret to M. leprae's tenaciousness. According to the study, people who don't appear to have come in contact with other infected people contract leprosy because it can live -- for up to several months -- inside of protective cysts formed by amoeba that are commonly found in soil, water, and even in humans' tears and mucus. What's more, M. leprae can survive digestion.

The paper doesn't delve deeply into how to leverage its findings to eliminate leprosy completely -- WHO defines "elimination" in terms of leprosy as less than 1 case in a population of 10,000 -- but knowing where to look is a good start.