Fast Company has reported the Rochester, Minnesota is on track to embark on a 20-year, $6.5 billion makeover. The impetus for the major renovation is to transform the small city best known as the home of the Mayo Clinic into a major player in the global medical tourism industry. 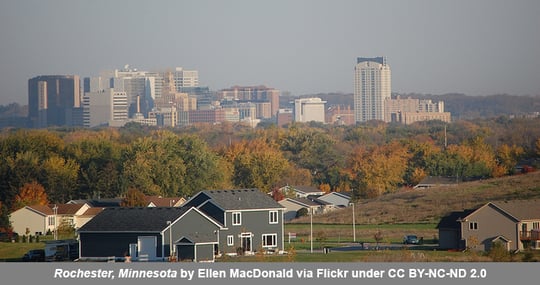 While medical tourism is most often associated with Americans and Europeans traveling to South American and Asian countries for lower-cost cosmetic surgeries, the field is much larger and more diverse than that. A 2008 report by Deloitte, Medical Tourism: Consumers in Search of Value, projected that the global market for medical tourism would grow to $100 million by 2010.

And while much medical tourism is centered around patients seeking lower-cost options for all kinds of conditions, patients from around the world travel to clinics and hospitals like Mayo, Johns Hopkins, and the Cleveland Clinic not because they are cheaper alternatives, but because they are renowned for superior care and innovation.

Over the next 20 years, planners expect Rochester’s population to double. To make healthcare visitors and new medical, biotechnology, and other newcomers comfortable, the city  will be outfitted with climate-mitigating comforts like heated sidewalks, underground tunnels, and skywalks as well as tourist-friendly amenities like upscale shopping, hotels with patients in mind, new restaurants, theaters, and boosts to the city’s public schools.

Investors expect that Rochester will be able to stand on its own against other mammoth, upscale healthcare destinations.

Of course everyone isn’t excited about the new Rochester, Minnesota. Residents and business owners are concerned that they don’t have a firm grasp on how, specifically, their tax dollars will be applied to the project. They’re also concerned that there won’t be enough housing and infrastructure to support Rochester’s growth from a small, livable city into an international healthcare and biotech hub.

Sweeping, large-scale change is definitely challenging, and Rochester’s DMC will be an interesting challenge to watch as it unfolds.