If you were in elementary school more than twenty years ago, you learned that there were five senses and that 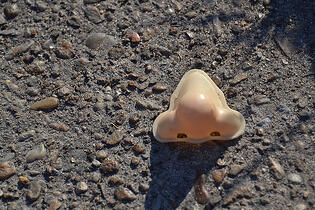 management of those senses was highly localized. Your eyes see. Your tongue tastes. Your ears hear. Your skin feels, and your nose smells.

We're learning, though, that this isn't exactly the case. As it turns out, our senses may be headquartered at specific locations, but in reality, sensory receptors are widely distributed all over the body. For instance, in a post earlier this month we discussed that our ability to respond to bitter flavors extends well beyond the tongue and that that some of our taste preferences are encoded in our genes.

The same is true for olfaction, the sense of smell.

Until 1991 when Drs. Richard Axel and Linda B. Buck published research that would win them the Nobel Prize for physiology or medicine in 2004, we didn't know much about how olfaction worked. What we did know was largely experiential: we stay away from noxious odors, which tend to be poison; familiar smells  appear to trigger memories; and smell is closely related to taste.

Since 1991, scientists have discovered that besides the nose, olfactory receptors reside in the far-flung regions of the body. According to Dr. Hanns Hatt, a researcher at Ruhr University Bochum in Germany, there are more than 15 olfactory receptors on the skin. The fact of the receptors' ubiquity means that their function probably goes beyond allowing you to stop and smell the roses.

Following are 5 areas of human health that are impacted by olfactory receptors (ORs) not located in the nose.

Olfactory receptors belong to a group of proteins called G protein-coupled receptors (GPCRs). GPCRs' job is to provide cells information about their environment. This makes GCPRs ideal targets for pharmaceuticals. In fact, some 40% or prescription drugs target GPCRs.

The scent of sandalwood may do more than help you stay focused during a yoga class. Researchers found that Sandalore, a synthetic variant of sandalwood, stimulated the olfactory receptors on abraded skin, which initiated the healing process. In another study, researchers found that a synthetic lily of the valley scent applied to the ORs on damaged skeletal muscles activated stem cells which turned on the muscle regeneration process.

Your kidneys have ORs and they may play a role in regulating your metabolism. Researchers found that the ORs present in mouse kidneys influenced the rodents' blood pressure and fluid balance.

Like the taste receptors mentioned in a previous post, the testes also contain ORs. Research by the aforementioned Dr. Hatt  and his team shows that those scent receptors act like a GPS to help sperm "follow their noses" to locate unfertilized eggs.

In 2009, Dr. Hatt and colleagues found that when they exposed prostate cancer cells to beta ionone, the proliferation of cancer cells slowed down. Beta ionone is the compound that gives flowers like roses and violets their distinctive aromas. Slowing the spread of cancer might literally be another reason to remember to stop and smell the roses.

Image Credit: Tony Alter, A Nose for the Road 2012