Yesterday evening, the Wall Street Journal reported on its website that researchers at the Texas A&M Health 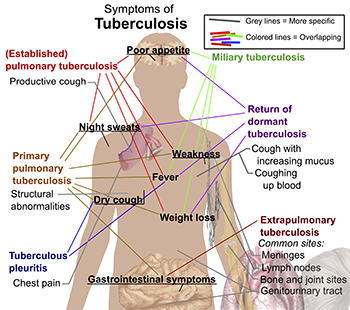 Science Center are closing in on faster, more accurate diagnostics for tuberculosis. The infectious disease usually attacks the lungs, but it can spread to other parts of the body -- extrapulmonary tuberculosis in those cases -- through the air from person to person. Although it is relatively rare in the U.S. it is not unheard of; tuberculosis (TB) made headlines when a woman with extensively drug resistant TB (XDR TB) was admitted to NIH.

TB is more prevalent than many of us think. According to the Centers for Disease Control (CDC), one-third of the world’s population is infected with the bacteria that causes TB. It is the leading cause of death for people with HIV, and it is most prevalent in parts of the world where widespread, inexpensive treatments are unavailable.

In treating any disease, time is of the essence. In the case of TB -- which can lay dormant for years in a person with the bacteria yet still transmittable to others -- a fast diagnosis can prevent the disease from spreading very far. Unfortunately, the most accurate TB diagnostic might not reveal a positive diagnosis for up to three weeks and it can take up to eight weeks to confirm that a person doesn’t have TB. During those weeks, a person with few or no symptoms could have pass the disease on to others.

Enter the research team at Texas A&M’s Health Science Center led by Dr. Jeffrey Cirillo. Cirillo and his collaborators are on to a solution that dramatically reduces the time from test to diagnosis. The team found a compound that binds to the TB bacteria and which can be detected using a battery-operated light reader after only 10 minutes.

10 minutes! The reader, according the article in the Wall Street Journal costs about $500 and the test itself around $2, allowing the possibility of beginning TB treatments immediately after diagnosis and even in countries with few resources including sporadic electricity.

In cases like that of the woman being treated at NIH, the speed with which diagnosis takes place also gives doctors the opportunity to determine the best treatment for the type of TB they’re facing. The Texas A&M group are hoping that they can use the same technology to quickly determine whether a TB case can be cured with antibiotics or if it is drug resistant.

The diagnostic device, called TB REadD, is in clinical trials in Thailand, Peru, Vietnam, and South Africa under the auspices of the World Health Organization.