The Father of Biomedical Informatics

About 50 years before many of us began obsessively tracking our sleep, diets, and exercise habits on tiny,wearable devices, the medical director at Kaiser Permanente in Oakland,California began packing up his 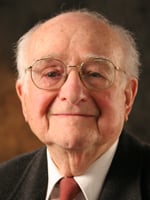 family to move to San Diego where he was going to launch a new program for Kaiser. With his house on the market, his family ready to go, and a newly appointed director in Oakland, Kaiser switched gears.

The doctor -- Morris Collen -- had to be creative.

As one of the early physicians at Kaiser Permanente, the company would certainly have found a place for him. However, Dr. Collen beat them to the punch. He'd attended a medical conference earlier in the year and had heard a speaker talking about the evolution of computers in business. The speaker postulated that computers might be used to revolutionize medicine. Morrie Collen knew that the failed San Diego plan was a great opportunity to take on an exciting new challenge.

He was, perhaps, the likeliest of candidates. From the beginning, Dr. Collen knew how to switch gears. In 1934, he graduated from the University of Minnesota with an electrical engineering degree. And then he met a nurse named Bobbie.

After meeting Bobbie, his future wife, Morrie Collen switched gears and went to medical school. When he finished his residency, Dr. Sidney Garfield recruited him to help run a medical practice serving thousands of employees at the Kaiser Shipyards during World War II.

Dr. Collen began creating a database of medical information for Kaiser employees. It wasn't exactly like your doctor tapping your health data into an iPad.

Dr. Collen and his colleagues would ask patients questions (e.g. "Do you smoke?") and then record their answers on a machine readable punch card. They would then feed those cards into a computer. By the 1970s, they'd collected health data from millions of patients.

And thus biomedical informatics was born.

Today, in the Age of Big Data, Dr. Collen's contributions cannot be overlooked. His intuition that data could improve health care is all around us.

A recent article in the New York Times highlights a case in which a doctor consults her hospital's massive data collection when a young patient presented with symptoms related to lupus that the doctor recognized as precursors to dangerous blood clots. She scoured the data for past lupus cases with similar symptoms and then "...did some very simple statistics and brought the data to everybody that [she] had met with that morning...".  The team was able to change course and add an anti-clotting drug to the girl's treatment, possibly saving her life.

AliveCor is a company that has developed a smart phone case that allows users to have real-time ECGs in their pockets. Those ECGs can be monitored remotely by the users' doctors. And, of course, there are the aforementioned personal health and fitness monitors that give basically healthy people a window into their health habits. Dr. Collen taught us that collecting health data can be empowering -- even when we're healthy.

Morris F. Collen died of cancer on September 27 at the age of 100. Since 1993, AMIA, the American Medical Informatics Association, has given an award named for Dr. Collen to medical informaticians "...judged by [their] colleagues to have reached a level of contribution worthy of ...recognition. That level will be defined, at least partially, by the first recipient and is set at a very high plane." Morris Frank Collen was the first recipient of that award.