Lil Bub is the internet’s favorite feline. With her perpetually kitten-like features, short legs, and snubbed nose, she’s irresistible. Even to science.

Last week, Gizmondo reported on an open science project spearheaded by three geneticists who launched their 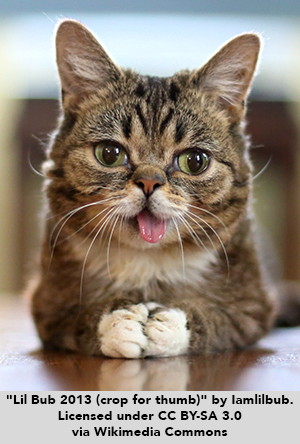 project on Experiment.com, a crowdfunding platform for researchers. Shortly after the Gizmondo piece, Daniel Ibrahim and Darío G. Lupiañez from the Max Planck Institute for Molecular Genetics in Berlin, and Uschi Symmons from ENS in Lyon, France had surpassed their funding goals and will now be able to sequence Lil Bub’s genome plus the genomes of 50 Maine Coon cats.

So why should we care? After all, Lil Bub is not the first cat to have her genome sequenced. That honor belongs to the University of Missouri’s Cinnamon, whose genome was sequenced in 2007.

Lil Bub’s celebrity is due, in part, to her odd cuteness, which can be traced back to several genetic mutations.

Born the runt of a feral litter, her dwarfism is caused by osteopetrosis, a disease which caused her bones to become extremely dense early in her development, thus impeding normal growth. Humans get variations of this disease and more frequently (though still rarely) than do cats.

In addition to her size, scientists believe that the osteopetrosis is responsible for her facial features as well. Early over-calcification caused her snout to stop growing sooner causing her tongue to protrude and preventing her from having teeth.

Besides osteopetrosis, Lil Bub likely comes from a line of famous cats -- the original owned by Ernest Hemingway -- who have polydactyly, which causes her to have extra digits on each paw. Typically polydactyly manifests on one paw. Lil Bub has extra toes on all of her paws, bringing her total number of digits to 22. Cats normally have 5 toes on each front  paw and then 4 on each back one.

Lil Bub’s multiple rare conditions make her ripe for study. Study that could help cats for sure, but which could also benefit humans. Ibrahim and Lupianez from the Planck Institute study the genetic basis of rare diseases in humans in their regular jobs.

The project, dubbed the “Lil Bubome,” (you knew it was coming…) aims to get to the bottom of the cat’s interesting phenotype, and it to share that data and the process with other scientists. Because cats and humans have genes in common and are prone to some similar diseases, including epilepsy and diabetes, the researchers are hoping for crossover that will lead to more personalized medicine.

Finally, they are hoping to de-mystify genomics for non-scientists. According to the funding website, “We love our work, but sometimes we hear that what we do is far removed from the 'real world'. This is one of the reasons, why this project is so special to us: when we first learned about Lil Bub we saw this adorable little cat, and we also saw a connection to our research.”

We’ve written about crowd-funded and open science research here and here; and about the cat genome here.