Some Thoughts on Jonas Salk, Vaccines, and Ebola

"Don't want little Johnny or Betty to develop a crippling disease with the potential for lifelong paralysis? Then 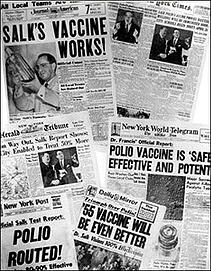 sign here and be a pioneer in improving global health!"

Of course this is an exaggeration, but in the 1950s, the polio epidemic in the United States was a terrifying reality. In 1952, the close to 58,000 new cases of polio in the U.S.  left more than 21,000 people with mild to severe paralysis. So when Jonas Salk launched an unprecedented trial of a polio vaccine in 1954, few people balked at the approach even though the participants were 1.8 million school children.

Because of the Salk vaccine, polio has been eradicated in 99% of the world -- 99%! Today, only the most remote, poverty-stricken regions of three countries have endemic polio: Afghanistan, Nigeria, and Pakistan. Salk's inactivated poliovirus vaccine (IPV) along with colleague, Albert Sabin's oral polio vaccine (OPV) are cheap and almost universally available through far-reaching eradication programs like that of the Global Polio Eradication Initiative (GPEI).

Public health initiatives like those carried out by GPEI and The World Health Organization (WHO) not only provide vaccinations against ravaging diseases like polio, they improve general public health the regions they serve. Organizations like WHO and GPEI have prevented 1.5 million childhood deaths by administering Vitamin A at the same time as the polio vaccine.

And all of this brings us to Ebola. As industry leaders, health organizations, and governments race to get Ebola vaccines into clinical trials, we hope that a page can be taken out of polio's playbook.

Imagine, if you will, that besides providing cheap -- a dose of OPV is only about 11 U.S. cents -- widely distributed doses of an Ebola vaccine, health organizations might also deploy mosquito nets that would curb the spread of malaria. The video clip below does a great job of showing the impact of the global push to end polio.

Last Tuesday would have been Dr. Jonas Salk's 100th birthday, and for his life-changing work, we say "Thank you and happy birthday!"