You might remember that back in 2007 and 2008, no publication felt quite right unless it included at least one 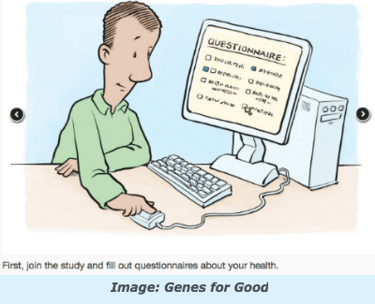 trend piece about the trendiest scientific and social development of the time: the spit party. Back then, companies like 23andMe were brand new and for less than $500, you could delve into your ancestral genetics, plus get a peek at your genetically encoded health risks and predispositions. After buying a kit online, you would spit into a receptacle, mail it to a lab, and have your results returned in a few weeks.

It was such a strange thing. No one (as far as we know) had ever been asked to spit into a plastic container and return it to a lab just out of curiosity. To make the idea more (sorry) palatable, 23andMe launched a very successful PR campaign that encouraged the well-heeled, the science- and tech-savvy, the famous, and the "all of the aboves" to make spitting out of curiosity into coast-to-coast social events.

Fast forward less than a decade. You can still buy a DNA kit from 23andMe, but the price has fallen to a more accessible $99.

Reined in by the FDA, the company no longer offers deep insights into individuals' health at genome-level (although the FDA cleared them to sell a test for  Bloom Syndrome in February), but you can still learn about where your ancestors' genes originated. More recently, the company has set its sights on drug development.

At the same time, social media became a tremendous force. Facebook, which had about 100 million users in 2008, has close to 1.4 billion users worldwide today.

Those numbers were not lost on researchers at the University of Michigan who launched a new kind of social spitting event with the hope of advancing precision medicine. Enter Genes for Good.

Gonçalo Abecasis is a biostatistics professor at the university and the principal investigator for Genes for Good. Along with his colleagues in Michigan and collaborator Scott Vrieze at the University of Colorado in Boulder, Abecasis has launched a Facebook application to enlist tens of thousands of people to contribute their DNA and their health information to wide-ranging  research into diseases like diabetes, alcoholism, heart disease, cancer, and obesity.

Volunteers participate by getting the app from the Facebook store -- it's free -- and answering an initial, detailed survey about their health to determine whether they qualify for the study. If they qualify, respondents receive a "spit kit" from Genes for Good which they return to the researchers. After a couple of weeks, the participants will get a report on their genetic ancestry along with their raw genetic test results.  If they choose, they can take their results to a genetic testing lab to get specific information about their personal health and disease risks. As long as they are enrolled, volunteers will be asked to participate in daily mini-surveys (often just one question) to help researchers collect information about their lifestyles that might impact their health.

Abecasis doesn't expect the research to end with Genes for Good. The group hopes to collaborate with other researchers by sharing participants' de-identified data for compatible research projects.

While this is exciting on many fronts, people have concerns. Because their data will be used for research, consent management is an issue, but Genes for Good claims to have that covered. When you download the app, you're encouraged to click through a very short graphical presentation explaining the process. After that, you're presented with a consent form.

For now, at least, participation is limited to U.S. Facebook users, and they must be over 18. Still, though, people will chafe at the idea of transmitting their genetic information over Facebook.

In an interview with BuzzFeed News about the project, Michelle Meyer, who is an assistant professor of bioethics at Union Graduate College, and who is not associated with Genes for Good, expressed it this way: "Some people are going to freak out about this.... DNA and Facebook are two words that most people do not want to hear in the same sentence.”

Her assessment may be spot on. However, Genes for Good stresses that Facebook is only the communications portal and that they will not have access to any users' information. Facebook users will have the option to make their participation public and they'll only be encouraged to share the fact that the project is available and seeking volunteers.

Despite some early criticism (similar to that faced by Apple about ResearchKit), Abecasis and his colleagues are hoping that Genes for Good will be the next Ice Bucket challenge, with tens of thousands of diverse social media users motivated by altruism to improve human health.