It is a gloomy, rainy day here in the Washington, DC area. It's the kind of weather that, when it goes on too long, 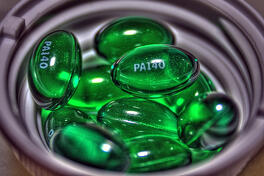 can cause one's mood to swing to the decidedly negative side of the pendulum. As it turns out, two factors in the opening sentences of this post - cynicism and low levels of vitamin D - may play a role in developing Alzheimer's and dementia according to two recent studies.

Both studies were reported in the journal Neurology.

In the first study, researchers asked 622 elderly Finns who didn't have dementia a series of questions that would measure their levels of "cynical distrust" in 1998. Later, the researchers found that subjects who were the most distrustful of their fellow men were more than 2.5 times more likely to have developed dementia. Moderately distrustful people had the same levels of dementia as their more optimistic cohorts.

The second study (you can watch the CBS report below), the Cardiovascular Health Study funded, in part by the Alzheimer's Association followed 1,658 heart-healthy, dementia-free Americans aged 65 and over for six years. Those with only moderate vitamin D deficiencies were 53% more likely to have developed any kind of dementia by the end of the study; and those subjects were 69% more likely to have developed Alzheimer's.

For subjects who were severely deficient in vitamin D, the numbers were mor startling: the risk for any dementia  leapt to 125% and 122% for Alzheimer's.

So what does all of this mean? We don't exactly know yet. According to Dr. David Llewelyn who led the second international study at the University of Exeter:

“Clinical trials are now needed to establish whether eating foods such as oily fish or taking vitamin D supplements can delay or even prevent the onset of Alzheimer’s disease and dementia. We need to be cautious at this early stage and our latest results do not demonstrate that low vitamin D levels cause dementia. That said, our findings are very encouraging, and even if a small number of people could benefit, this would have enormous public health implications given the devastating and costly nature of dementia.”

While we don't have definitive proof that low vitamin D and cynicism cause dementia, it certainly couldn't hurt to get some sunshine -- safely, of course -- and adopt a more positive attitude.

Image by Stephen Nesbit via flickr under a Creative Commons license.