Lately, the happiest place on earth is a little less buoyant. The reason is that beginning around December 20, 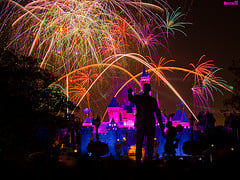 2014, Disneyland and the Disney California Adventure Park became Ground Zero for the latest measles outbreak in the United States. Last week, the California Department of Public Health reported 59 cases of the highly infectious disease in the state, 42 of which originated in the Disney parks.

Measles is on the rise, and that is surprising given that by 2000, endemic measles -- that is, measles infections that originate in a given place -- had been eliminated in U.S. On the other hand, it may not be that surprising.

Prior to the measles vaccine becoming available in 1963, millions of Americans got and transmitted the disease every year. Tens of thousands were sick enough to be hospitalized. Thousands developed encephalitis and at least 500 people died of the disease every year. Fast forward to today, and many Americans -- many physicians included -- have never never even met someone who'd had measles. However, that reality may be changing.

Since 2000, there has also been a vocal, and despite being largely discredited, a growing, anti-vaccines movement. Actress Jenny McCarthy and best-selling author and pediatrician Bob Sears have been among the more prominent faces in the movement, which believes that vaccinations may be at the root of illnesses and conditions more serious than the diseases they prevent. Chief among those perceived vaccine-caused conditions is autism.

Because the U.S. has eliminated endemic measles, the new cases are most likely attributable to unimmunized individuals who traveled to countries where measles is not uncommon, or to unimmunized visitors from those countries who are carrying measles, but who are probably unaware of it.

In order for vaccines to work to prevent public health catastrophes, two things have to happen: they have to prevent immunized people from getting sick and enough people have to be immunized to prevent the targeted disease from making those who can't be immunized sick. In the case of the measles vaccine, that would include pregnant women, babies under a year old, the elderly, and others with compromised immunity. This secondary protection is often called "herd immunity." When enough of members of a community are innoculated, the disease tends to find its way to groups with weaker immunity.

A study based in the Netherlands showed that when 95.7% of a population has been immunized, there are very few measles outbreaks. And that brings us to Disneyland, which is kind of the perfect environment for a measles outbreak.

Millions of people visit the parks every year from all over the world. Countries in Europe, Asia, and Africa all still have measles. When people make their way to Disneyland for, say, a one-week trip, they may not know that they've got measles until they get home. People can carry the infection for up to 17 days before they get sick.

The Disney parks are located in Orange County, California. On the whole, more than 95% of Californians are vaccinated against measles. However, there are many pockets in the state where there is a significantly higher than average amount of vaccine skepticism. In Orange County, more than 8% of parents don't have their children vaccinated, leaving not only their kids susceptible to measles, but also putting other compromised individuals at risk. 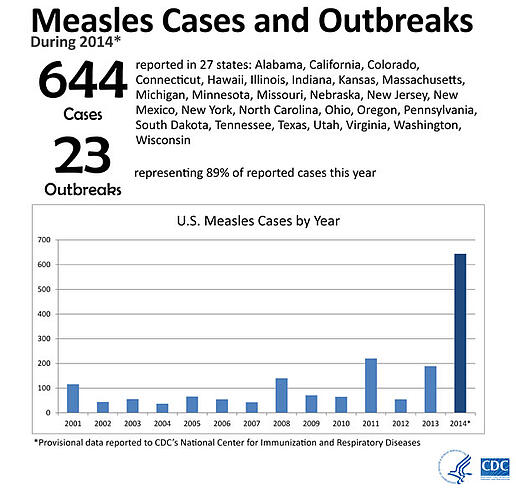 Hopefully those numbers will cause those taking an anti-vaccine stance to re-evaluate their position.

Chart from the CDC.