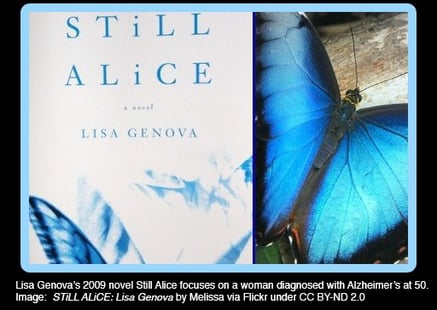 PET scans and cerebrospinal fluid testing can detect the presence of amyloid plaques long before people suffer the disabling dementia that is a hallmark of Alzheimer's. For drug developers, knowing who's got amyloid plaques early on will allow them to recruit subjects for clinical trials for drugs that might prevent or treat AD.

While this is very exciting news, there are also some cautions to note. First, if you've been following the Map of Biomedicine here on the blog, you've read that there are psychological costs associated with diagnostics that precede available treatments.

So, knowing that you've got amyloid plaques when you're in your early 30s might not be beneficial  because so far, there are no cures for or guaranteed therapies to prevent Alzheimer's. Next, even if there were, young people who have begun to develop amyloid plaques would have to weigh the pros and cons of beginning a course of treatments that could go on for decades.

Besides indicating which patients have -- or will have -- AD, researchers found that people with mild cognitive impairments (MCI) weren't always en route to Alzheimer's. People with MCI who didn't have amyloid plaques were unlikely to have Alzheimer's, thus allowing their physicians to pursue treatments for dementias caused by other factors.

You can read the studies at JAMA here and here. And if you fell behind on the Map of Biomedicine diagnostics posts, have no fear! You can get every post with updates plus enhanced versions of the map by downloading a copy of our new ebook here.