The National Institutes of Health announced today that it will provide $10.1 million in supplemental funding to 82 grantees so that they 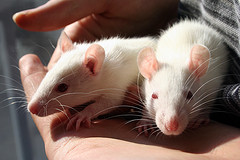 can include more female subjects in preclinical and clinical trials. Currently, the overwhelming number of subjects in research are males. Including male lab animals and male cell lines.

The reasons are many, but the a prevalent reason for the paucity of female participants in clinical and pre-clinical studies has been scientists' desire to limit variability in their studies when that has been possible. Women's menstrual cycles and female animals' estrus cycles are variables that can have an impact on results. However, hormonal cycles are a fact of women's lives, and therefore must be considered in research that influences human health.

In a an article in the New York Times, Dr. Janine Austin Clayton, NIH's associate director of women's health research put it succinctly, "We literally know less about every aspect of female biology compared to male biology." And that's bad for all of our health.

Back in May, Dr. Clayton and NIH Director Francis Collins unveiled steps that NIH planned to take to resolve the bias that excludes female subjects and cell lines from research. The bias is not inconsequential. Since so few preclinical studies include female subjects, drugs go to market having only been tested on a sample that represents males. As a result, drugs go to market without enough data to understand their effects on women. As a result, women suffer more adverse drug reactions than do men.

The 82 grantees will adjust their studies to address sex-based variability. According to a press release from NIH, the grantees projects "...span a wide array of science, including basic immunology, cardiovascular physiology, neural circuitry, and behavioral health."

The newly supplemented research will add one of the following features to the existing projects:

Dr. Clayton appeared on PBS Newshour last may to talk about the agency's plans to include more female subjects in NIH funded projects. You can watch the video (about 8 minutes) below. Read a previous post about sex differences in research here.

Photo by Sarah Laval Ratties July 2008 via Flickr under a Creative Commons license.