Psychology of Diagnostics Not Always Aligned With Best Care Decisions

In my last post I talked about accessing your health information, including the results of diagnostic tests. In general I think people should be more aware of what their test results mean, and how their physicians use those results to make decisions about treatments and other tests.

So how do physicians decide whether to give a test and how are test results used? In general, it’s quite simple: tests are given if the benefits outweigh the costs. But what is a benefit? For a test that identifies cancer, you might think that the benefit is identifying cancer early. But that’s not always the case.

Let’s look at an example. Prostate specific antigen, abbreviated PSA, is a protein that can be found in the blood of men who have prostate cancer. The first thing to note is that no test is 100% accurate. The PSA test, roughly speaking, can only correctly identify 50% of men who have high-grade prostate tumors. The other half would be missed. It has a specificity of 90%, so it correctly identifies almost all men who don’t have prostate tumors. I’d want to know those numbers before I got any test, but a PSA is even more complex.

Prostate cancer comes in several forms. Some are fast growing and dangerous, but many others are slow growing and much less serious. These tumors advance so slowly that men who have them often die of other causes before the prostate cancer becomes dangerous. So in those cases, a positive PSA test could lead to additional testing and treatment, including biopsies and radiation treatment. These things can have side effects, and of course, cost money.

What’s really important to know is whether PSA tests result in men living longer. Unfortunately, that is not very easy to answer. You need to run a trial where you randomly decide to do PSA tests, and then follow those men over an extended period of time to see how many get prostate cancer and die from it. A European study in published in 2009, which took over ten years to complete, found that there was modest improvement in survival by using PSA testing, but about 1,400 men would have to be screened, and about 50 men would have to be treated, to prevent one prostate cancer death.

This is why I referred to the ‘Psychology of Diagnostics’ in the title of this post. Would you want to take a test that doesn’t tell you how dangerous a tumor is? Once you find the tumor, are you really going to want to wait to see if it grows quickly, when catching fast-growing tumors early is the best way to stop them?

PSA is not an isolated example. Mammography is the standard method of early detection for breast cancer, and it shares many of the same characteristics as PSA testing. It misses at least 20% of breast tumors, and some tumors grow so slowly that they will never kill you. These facts leave the survival benefits of routine mammography up for debate, at least for younger women. 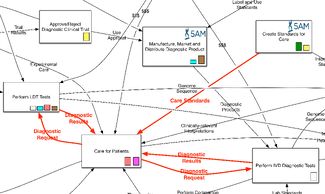 I’ve highlighted the section of the map of biomedicine that addresses this process. Organizations like the American College of Physicians and the American Cancer Society provide recommendations on using and on interpreting diagnostic tests, which influences which tests physicians order, and how they use the test results.

Of course, what’s really needed to solve these problems are diagnostic tests that  tell whether a tumor is fast-growing or not. The hope is that efforts like the Cancer Genome Atlas will reveal genetic differences between fast- and slow-growing tumors, which can be detected in either blood or biopsy samples. Patients will know if they can wait or if they should get treatment immediately. By removing much of the guesswork, the psychology behind getting  diagnosis can better inform patients' and doctors' best care decisions.