Rolling the Dice on Cancer 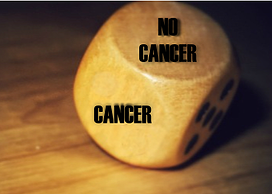 and biostatistician Cristian Tomasetti reporting that two-thirds of all cancers are unavoidable.

At first blush, this seems like particularly bad news, given researchers' efforts to zoom in on the genetic and environmental factors that cause the dreaded disease, not to mention, individuals' attempts to stave off illness by adopting healthier practices like quitting smoking and eating healthier, "cleaner" diets.

All is not lost, though. Knowing that certain cancers run in your family is good information to have, and you can significantly lower your risk of getting sick by taking measures that someone without a genetic predisposition might skip. Same for adopting healthier habits like smoking cessation and eating a healthier diet. There's no point, after all, in not preventing the 1/3 of cancers that are linked to genetic and/or environmental causes.

But what about the two-thirds -- frightfully close to 70%! -- that just happen?

The paper suggests that while you can't prevent them, it does seem that we can find the likeliest targets. Vogelstein and Tomasetti found that absent environmental and genetic factors, cancers are more likely to occur in tissues that have greater numbers of long-lived cells. Specifically stem cells.

Stem cells replicate to regenerate tissues. Every time they divide, they pass along a copy of their DNA. Normally this works fine, but the more often it happens, the more likely there is to be a glitch. The possibilities for glitches increase with the number of stem cells.

In an interview in Time, Tomasetti offers this fantastic metaphor:

“Think of [it] as the risk of having an accident if you are driving a car. ...If you drive the car on a cross country trip, your risk of an accident is much higher than if you take a local trip to the grocery store. The risk correlates to the length of the trip. The trip to the grocery store might be thought of as bone cancer, which has few stem cell divisions. While the cross country trip might be more like colon cancer, which has many more cell divisions.”

The researchers found that there is a strong correlation (.81) between the number of stem cell divisions and the lifetime likelihood of developing some cancers.

This might mean that patients can expect early screening to become a routine part of their regular care similar to diabetes or cholesterol screens. In fact, we wrote a post about Vogelstein's work in very early cancer diagnoses last year. We also looked at the flip side of stem cells -- as potential cures rather than causes -- last month.