"The results indicate that two-thirds of the variation in cancer risk between different tissues is caused by chance mutations associated with cell division. This is not the same as saying that two-thirds of cancer cases are caused by chance, because the results do not offer any information about the relative rates of occurrence of the cancers in question." (emphasis ours)

Much of the reporting on the paper was quite fatalistic. So much so that Johns Hopkins re-released its original press release on the paper with an addendum that includes an illuminating Q + A with Drs. Vogelstein and Tomasetti. When asked for an analogy to explain what they found the doctors answered this way:

"Getting cancer could be compared to getting into a car accident.  Our results would be equivalent to showing a high correlation between length of trip and getting into an accident [...] the longer the trip is, the higher the risk of an accident.
The road conditions on the way to the destination could be likened to the environmental factors in cancer. Worse conditions would be associated with a higher the risk of an accident.
The mechanical condition of the car is a metaphor for the inherited genetic factors. The numbers of mechanical problems in the car—bad brakes, worn tires, etc.—increase the risk of an accident. Think of these mechanical problems as inherited genetic mutations. [...] Similarly, the amount of inherited genetic mutations is among the factors that contribute to [...] risk.
Now, consider the length of the trip. This could be likened to the stem cell divisions and random mutations we discuss in our paper. Even with bad road conditions and driving a car in disrepair, the length of the trip plays a significant role. An extremely short trip has an accident risk close to zero.   Regardless of road and car conditions, the probability of an accident occurring increases with distance traveled.  Short trips have the lowest risk, while long trips are associated with the highest risk.
Using this analogy, we would estimate that two-thirds of the risk of getting into an accident is attributable to the length of the trip.  The rest of the risk comes from bad cars, bad roads and other factors.   In terms of cancer, we calculate that two-thirds of the variation is attributable to the random mutations that occur in stem cell divisions throughout a person’s lifetime, while the remaining risk is associated with environmental factors and inherited gene mutations."

In other words, those cells in the body whose stem cells replicate the most often over the longest period of time are more likely to develop cancer, but that doesn't mean that they will. It's also worth noting that breast and prostate cancers -- the two most frequently occurring types -- were not considered in the study. The upside to all of this is that new better, less expensive gene sequencing allows doctors to find and treat those cancers that are due to chance (again, not 2/3 of all cancers) at their earliest stages.
Apologies for not getting this one quite right. 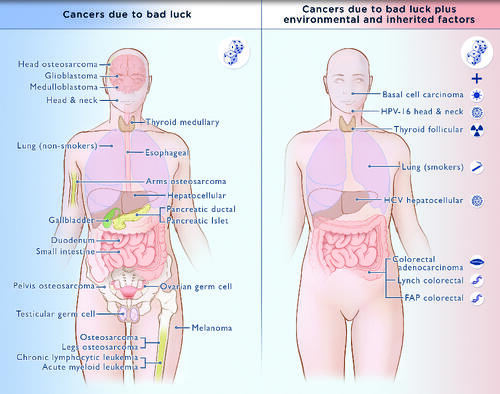