On Sunday, I had a chance to thumb through Time’s “100 Most Influential People in the World” issue. The list is 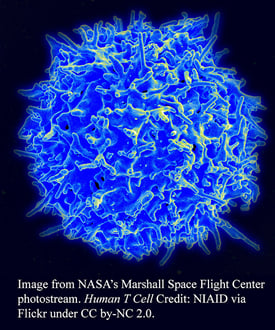 Although I wasn't surprised, I was pleased to note that eleven of the luminaries work in and around the life sciences and healthcare, with the wide majority of them (7) landing in the “Pioneers” category. The other honorees were almost evenly divided among the Titans, Leaders, and Icons.

Not a bad showing, but that there were no scientists among the Artists gave me pause. I’ve been struck by the number of scientists that I’ve met or learned about whose art figures into their scientific work.

An example might be astrophysicist and cultural phenom Neil deGrasse Tyson’s latest move to late-night television following his spectacularly successful reboot of Carl Sagan’s Cosmos. Another is the breathtaking images in Cell’s web feature, the Cell Picture Show.

And finally there’s Music of the Spheres, a collaboration between visual artist Charlotte Jarvis and bioinformatician Dr. Nick Goldman. The pair have stored the second movement of a specially commissioned concerto onto synthetic DNA molecules, and those molecules are suspended in soap bubbles. Their next move — which they hope to fund through a Kickstarter campaign — is to perform the complete concerto. The U.K.'s Kreutzer Quartet will play the first and third movements in a performance space, but during the second movement, the musicians will rest their instruments and the concert hall will be filled with -- if not auditorily available music -- music-infused bubbles that the audience will experience through bubbles popping on their skin.

All of this got me thinking: science spans disciplines (Go ahead, you can tweet it!). It also got me thinking that the larger culture, despite frequently cringe-inducing news to the contrary, loves science, and no more so than when it stirs our imaginations, prods us to action, or offers us deeper insights.

With that, I propose kicking off a new hashtag: #ScienceIs. I hope you’ll play along and include your thoughts about what #ScienceIs. I’ll go first:

And don't miss out on our new ebook. It is absolutely free and absolutely invaluable. Click the button below to get yours.