The Genomics Behind the Cancer that Killed Bob Marley

When reggae legend Bob Marley noticed the discoloration under the nail of his big toe, he assumed that it was a bruise. Marley, an 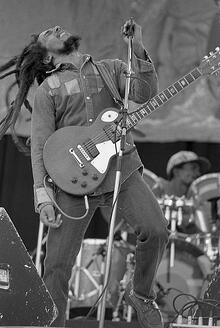 avid soccer player, assumed that he'd injured his toe during a friendly match. By the time he realized that the discoloration was cancer, it was too late.

The cancer that Marley had is a rare form of melanoma called acral lentiginous melanoma or acral melanoma, and researchers at the University of Manchester in the UK have sequenced its DNA.

Unlike cutaneous melanoma, the skin cancer that  that most of us are familiar with, and which can be prevented by regular sun protection and avoidance of tanning beds -- the researchers found that acral melanoma is not caused by UV exposure and it is genetically different from the more common form of melanoma. The actual cause of the disease is still a mystery, but unraveling the acral melanoma's genomics puts scientists on the path to discovering what causes it.

Here's what researchers do know:

The researchers' findings will be published in a paper in the journal Pigment Cell & Melanoma Research. An early view of the paper is available for download.