Malaria and Dengue Vaccines for Mosquitoes?

According to the World Heath Organization (WHO), 207 million people contracted malaria and  627,000 died 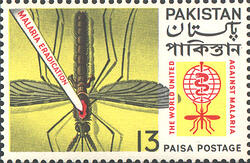 from it in 2012. Additionally, there were 50 - 100 million cases of dengue in the world's tropical and sub-tropical regions. The good news: infection and mortality rates for both mosquito-borne illnesses are declining. The better news is that researchers may be on to a solution that targets these dangerous diseases at their source: the mosquitoes that carry malaria and dengue pathogens.

Researchers cultured the Csp_P in blood samples and sugar water and envision that it could be added to insecticide traps that are designed to lure mosquitoes that then spread the insecticide in their colonies. The one-two punch approach would kill most mosquitoes and seriously curtail the survivors' ability to infect humans with malaria and dengue.

There is also hope that Csp_P could be used as a malaria or dengue treatment for humans that are already infected since the microbe killed, or at worst, made inert,  the pathogens in mosquitoes.

While this is all good news, Csp_P as a malaria treatment for humans or as "vaccines" for mosquitoes is still a long way away, and there is some skepticism that such an approach would work. From a news article on the Science website:

"Tanjore Balganesh, a medicinal chemist who heads the Indian Open Source Drug Discovery program in Bangalore for neglected diseases such as malaria and tuberculosis, is skeptical, however. Because Csp_P is so toxic to Plasmodium, the dengue virus, and even the mosquito that carries them, there is a good chance it could be damaging to human cells, too, he says. That’s not a death blow for this line of inquiry, however. “It’s still early days [for this research],” he says, “but no drug discovery program is without problems.”"

For more posts on vaccines on Up at 5AM, click here.