Why People Believe in Science, But Not Vaccines

On Tuesday, I blogged about the measles outbreak that began at two Disney theme parks in California last month. In researching the piece, I stridently avoided using a term that I'd seen in lots of articles that characterized vaccine skeptics as "anti-vaxxers." To me, the term seemed unnecessarily hostile in a debate that, 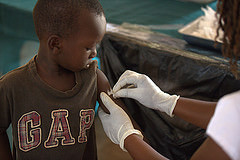 to my ears, seems like hardly anything to debate at all: of course I vaccinate my children and you should too! Who could argue with that?

As it turns out, lots of people, and for a very long time. Before the latest measles outbreak and before the now infamous paper in The Lancet linking vaccines -- and particularly the MMR vaccine, which protects against measles as well as mumps and rubella -- to autism, people were skeptical of vaccines. Two relatively new books investigate the roots of this skepticism: Eula Biss' On Immunity: An Innoculation and Elena Conis' Vaccine Nation: America's Changing Relationship with Immunization.

I haven't read the books yet, but each one is a social and cultural history of our fraught relationship with immunization. The runway for Biss' history is personal. She grew up with a doctor for a father, but, like many modern parents, bombarded with information (good and bad) she found herself struggling with whether or not to immunize her own child. In her review of the book in Maclean's, Sarah Liss anticipates your own skepticism that this might be a memoir of parental hand-wringing, and counters it:

Her efforts to grasp the risks and benefits of vaccination ground this engrossing narrative, allowing her to explore and sensitively debunk the anxieties of anti-vaccination advocates. But On Immunity is not a lightweight personal riff. ... She investigates links between vaccines and autism (spoiler alert: there’s no proven causal relationship), and pores over arcane accounts of smallpox inoculation involving cow pus and open wounds. She describes how, in 2012, a Pakistani Taliban leader banned polio vaccinations, claiming they were “a form of American espionage.” That crackpot theory turned out to have credence. “In pursuit of Osama bin Laden, the CIA had used a fake vaccination campaign . . . to gather DNA evidence to help verify bin Laden’s location.” (The attempt failed.) The politics of immunization, it’s clear, are complex.

Complex, indeed. Combine that with humans' resistance to changing our minds about our deeply held beliefs, even in the face of irrefutable evidence, and you get, even if you vehemently disagree, why people cling to the notion that vaccines pose a danger to their children.

Conis, an Emory University historian, explores the cultural shift in American's attitudes about science from the pro-science era of the Space Race and the birth of the polio vaccine to today, where the parents of more than 8% of Orange County, California's children have opted out of vaccinations. Orange County is where the Disney parks are located.

In her book, Conis puts forward the notion that the vaccinations may be a victim of their own ordinariness and near ubiquity. She says in an interview with the Los Angeles Times:

"As the childhood vaccination schedule has expanded — an ever-longer list of vaccines against an ever more varied array of diseases — support for vaccination in general has, not surprisingly, begun to erode. Trust in the measles-mumps-rubella vaccine, for example, may be a casualty of this historical process."

Both authors seem sympathetic to skeptics' positions, but hold firmly that immunization works and that it's good for all of us. They also both recommend a more tempered, nuanced discussion. They remind us that the people on the other side of the debate are people that we know.

Everyone, though, is not so willing to sit and have a chat with those on the other side. Forbes' Dan Diamond is in favor of suing parents who fail to immunize and whose children cause serious illness or death to other kids.